Photo of Sunflowers and Aurora Taken Moments Before Camera Broke


Aurora chasing photographer MaryBeth Kiczenski had to battle a camera that failed on her to capture this gorgeous photo of the northern lights dancing over a sunflower field.

Kiczenski tells PetaPixel that the screen on her Nikon Z6 camera cut out on her at a vital moment. But thanks to a helpful feature she was able to come away with the shot.

“Since all the controls are done on screen, it left it pretty limited,” explains Kiczenski.

“There was no focus-checking. However, I did all the focus stacking for the flowers prior to the screen failing.” 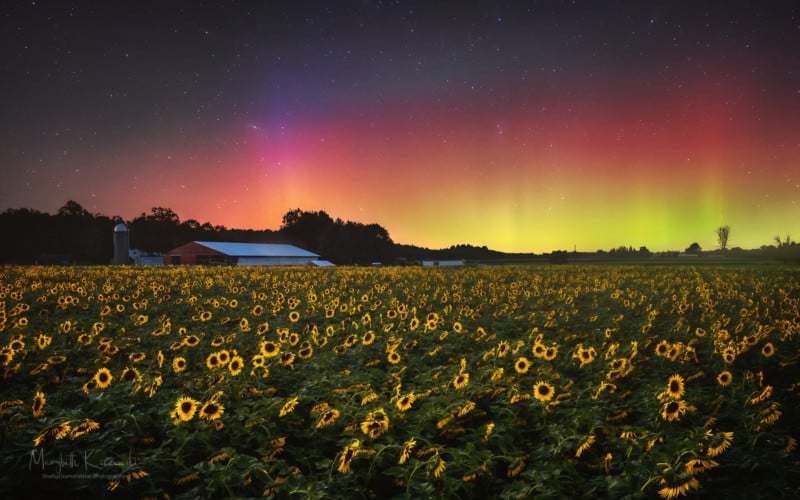 Thankfully for Kiczenski the Nikon Z-series has an automatic ‘focus to infinity’ feature when turned on.

“Since the camera was already set up on the tripod, I just took images and crossed fingers that it was working and writing to the card,” she explains.

“I had a general idea for exposure based on past events, so it was a guess. And lo and behold, it did take a few frames.”

Kiczenski has now sent the camera out for repair and says a faulty camera was not the only problem she was fighting.

“It was also incredibly humid. The lens would fog up almost instantly,” she writes on Instagram.

“I’d wipe the lens, hit the button, and cross fingers.”

For the close up photos of the sunflowers she used a Nikkor 20mm on her Nikon Z6. But for the wider shot of the whole field she used a Sony A7iv with a Sony 24-70mm attached.

She took the photos on Hall Farm in Rock, Michigan where she had been chasing the auora lights for five days in a row.

“This sunflower trip was part of a larger scale aurora chasing trip,” she explains.

“It was the fifth and final day, and also about the last day before the flowers really started to lose their luster.”

Kiczenski had permission to be on the private property and was hoping to capture the magnificent lights above the field.

“As such, I did have permission to be out there on their property that night. I was monitoring the space weather data closely, looking for tell-tale signs of activity,” she says.

“Around midnight, it happened. Although very brief, about 15 mins, that was all I needed.”