With the launch of their new M1 Ultra SoC, Apple unveiled a new desktop computer called the Mac Studio, featuring a new Aluminium enclosure, high-end specs, and plenty of ports. To pair with the Mac Studio, Apple also introduced the Studio Display, a 27-inch 5K Retina monitor featuring a A13 Bionic chip with a built-in camera and microphones, and more. 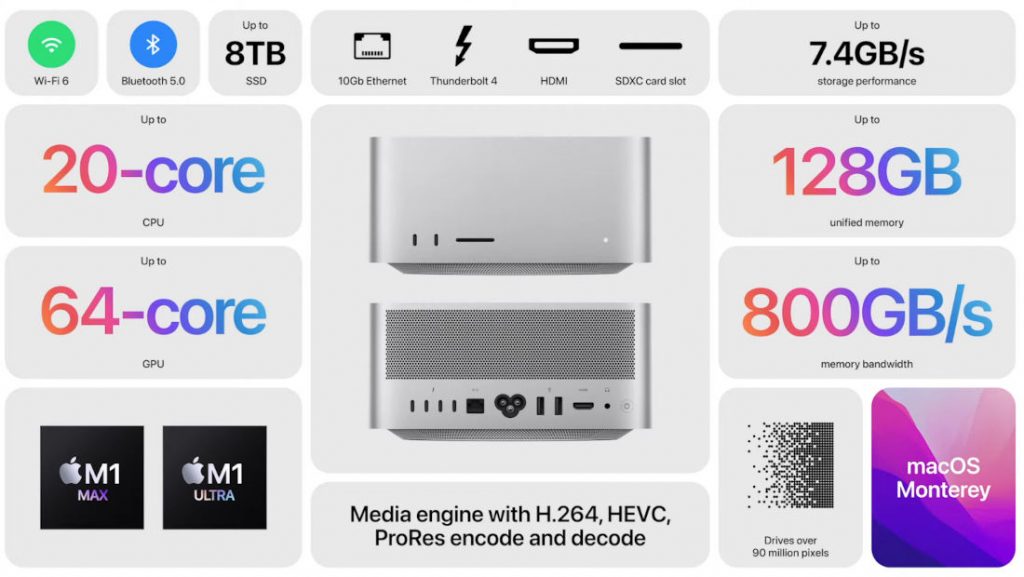 The Apple Mac Studio can be configured with either the M1 Max or the new M1 Ultra with up to 64GB and 128GB of unified memory respectively. Being a desktop machine, the Mac Studio has a wide variety of ports, including 2 USB-C ports and SDXC card slot in the front, and in the back it has 4 Thunderbolt 4 ports, a 10Gb Ethernet port, two USB-A ports, an HDMI port, and a pro audio jack. It also comes with support for Wi-Fi 6 and Bluetooth 5.0. 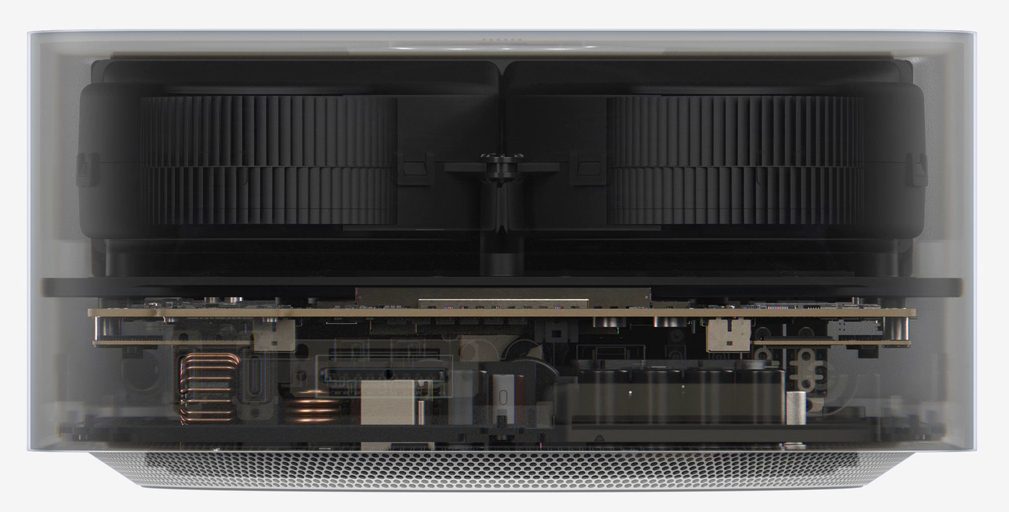 According to Apple, the Mac Studio is capable of driving up to four Pro Display XDRs, plus a 4K TV, which calculates to nearly 90 million pixels.

The Mac Studio has a newly-designed Aluminium enclosure which measures 7.7 x 7.7 x 3.7 inches. It has a new dual-fan cooling system that circulates air through 4000+ machined holes in the bottom and back panel, cooling both the SoC and the internal power supply. 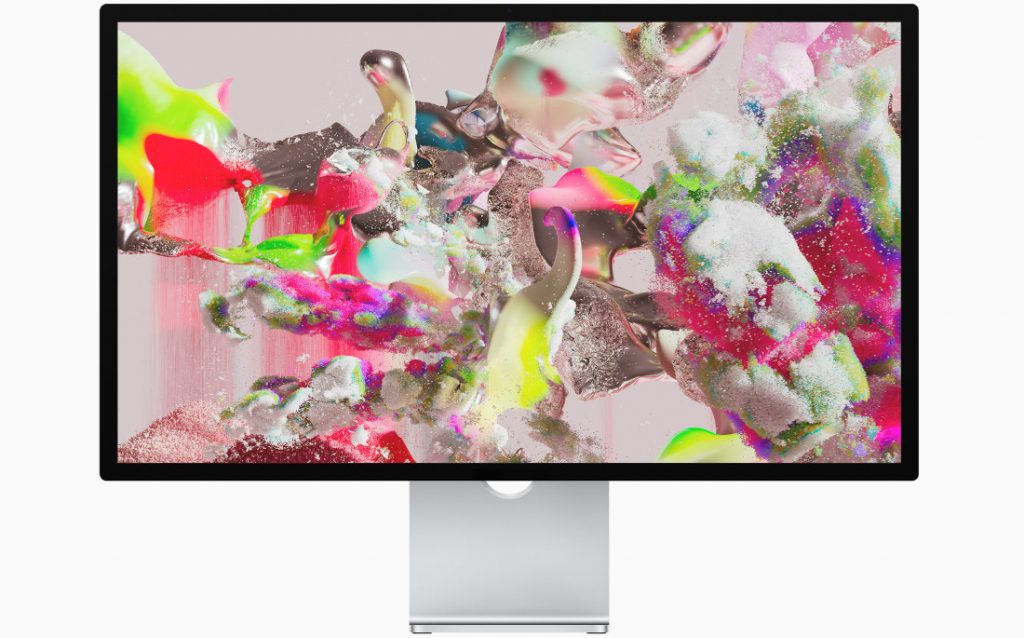 Next, Apple introduced their first standalone desktop monitor in a long time, called the Studio Display. The monitor features a 27-inch 5K Retina panel with a peak brightness of 600 nits, support for DCI-P3 colour gamut and is offered with either an Anti-reflective coating or the nano-texture glass option. 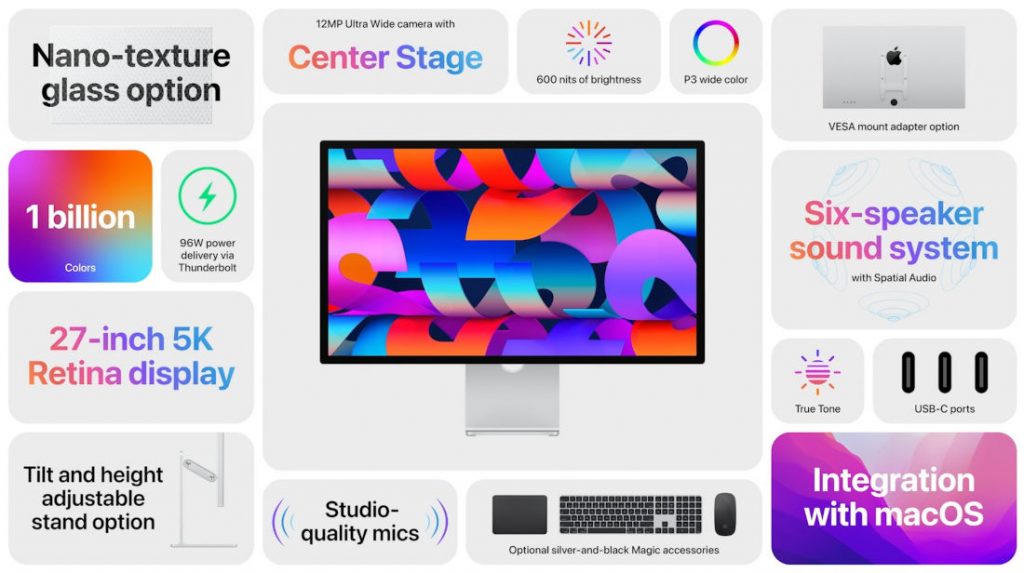 The Studio Display has an all-Aluminium enclosure with narrow bezels and by default, it comes with a built-in stand that offers up to 30 degrees of tilt.  Inside the Studio Display, Apple has put an A13 Bionic chip, and its purpose is to enable Center Stage feature on the built-in 12MP Ultra Wide camera. Along with this, it also features a three-microphone array and high-fidelity six-speaker sound system inside. 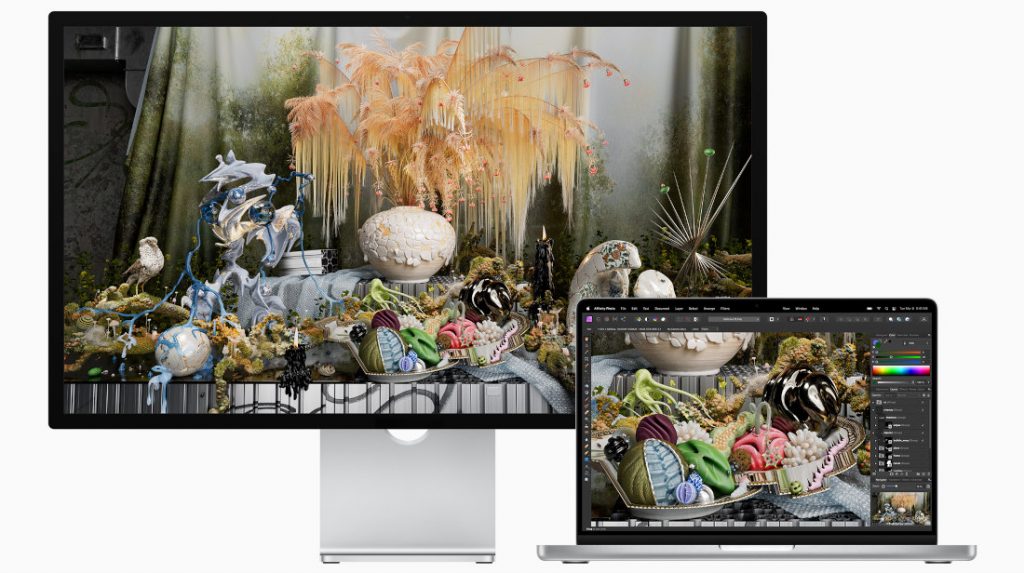 In the back, the Studio Display has three USB-C ports and a Thunderbolt port that allows users to connect to a Mac with a single cable. The Studio Display can also deliver up to 96W of power to a Mac notebook, which is enough to fast charge the 14-inch MacBook Pro.

The Mac Studio and Studio Display are available for order today on Apple.com and will begin reaching customers from March 18th. The Mac Studio starts at Rs. 1,89,900, while the Studio Display has a starting price of Rs. 1,59,900. Apple also released new colour variants of the Magic Keyboard with Touch ID and Numeric Keypad for Rs. 19500, a new Magic Trackpad for Rs. 14500, and Magic Mouse for Rs. 9500.